"It's okay. You can fight again another day."
— Alice in Bloody Roar 4

Alice Tsukagami (塚神アリス Tsukagami Arisu) is a fictional character from the Bloody Roar series. Her beast form is the rabbit and she is currently translator in the organisation World of Co-Existence.

She appeared in the first installment of the series, Bloody Roar, where she is the only female character to be playable after this opus.

In the fourth installment, Bloody Roar Primal Fury/Extreme, Alice undergoes a drastic appearance change. Supposedly for a more mature look as she grows up.

Alice was kidnapped as a small child by the company of Tylon and was converted into a Zoanthrope. In fact, after being subjected to physical experimentation, her latent powers were awakened, after which she was used as a test subject and given battle training. Alice managed to escape the organization before she could be brainwashed, but another girl wasn't so lucky. Her name was Uriko. Alice decided to fight back against Tylon and rescue the little girl who'd helped her escape with the help of Uriko's mother, Mitsuko. They found a brainwashed and violent Uriko in the Tylon Corporation secret lab but the young girl is defeated and found her mind. Grateful, Mitsuko choose to adopt Alice, we supposed that Alice lost her parents when she was abducted by the corporation. In the last scene, Alice is half asleep in bed, mumbling about wanting an extra five minutes. When she checks her clock, she realizes that she is going to be late for school. She hurries to get dressed as Uriko comes to stand in her doorway, asking what's taking so long because her friends are waiting. Alice whines that her 'sister' didn't wake her up, and the two have to rush out the house late. Alice has a piece of toast hanging from her mouth as she calls goodbye to Mitsuko and calls out to Uriko to slow down.

Love for the Wounded

After the fall of Tylon, Alice was all alone in the world. So it was Mitsuko, Uriko's mother, who adopted her into the Nonomura family so she could live out a peaceful life as a part of their family. After graduating high school, she became a nurse. One day, her friend Yugo was brought into the hospital where she worked. But as she tried to talk to him, he left the hospital. Concerned for his welfare, she chased after him to drag him back to the hospital for treatment. In her path, she bumps into Gado who asks her for a fight, Alice is annoyed with having to fight against Gado but wins the duel, Gado praises her skill and says she would be competent leader of a Zoanthrope group that could bring peace between their species and the humans. Alice declines, saying she has her patients to attend to and returns to the hospital. Shortly after, she is tending to Yugo who is less than pleased with her fussing over him. Aside what he thinks, she continues to nurse his wounds.

Alice, a gentle soul, shows great love and compassion to those who are sick and injured. Being a close friend with Yugo, she decides to follow him to participate in the activities of the Non-Government Organisation (NGO), the World of Co-Existence (W.O.C.). In doing so, she leaves her job as a professional nurse. She becomes anxious when Yugo goes out alone to discover the origins of the 'XGC', a mark that appears on the bodies of Zoanthropes and bringing great power but at the cost of their life. Being marked by the XGC herself, Alice does not hesitate to follow after Yugo... They find the man between the curse, Xion. After been defeated, Xion awakens in Alice's arms free from the influence he was under. She tells him his actions weren't his fault and supports him while taking him back to civilization. He asks her to take him to a place where he can be around people and make up for what he'd done.

The W.O.C. once a small volunteer group has now grown into a commercial enterprise. Alice finds herself confused amongst the big changes occurring in the company. Aside, she concerns herself over Yugo, who has recently taken up the invitation to participate in the tournament in the Zoanthrope Kingdom. She agrees with his reasons to go, having heard the rumors of suspicious activities occurring behind the scenes, though she feels saddened she wasn't invited and that Kenji knows more information than her in the circumstances. Though, she feels the young ninja is very mature and he wouldn't let his emotions overcome him like she would over Yugo, and supports his good work as the vice-president of the W.O.C. It's as she is considering these thoughts that she receives a letter from Long, inviting her to the tournament. She takes up the invitation and heads for the tournament. After her last fight in the tournament, against Long, Yugo appears just behind her supporting what appears to be an unconscious Cronos. Alice is surprised, but looks greatly relieved that he's alright. She walks over to them and suddenly slaps Yugo across the face. He is completely stunned by this. She shouts at him for getting them involved in a situation that could have got them killed. He tries to comfort her, but she snaps away from his touch, crying silently.

Alice whose been living the life of a volunteer in the W.O.C, has recently been aiding those who have been injured in the earthquakes in the area. A young girl, dress in the clothes of a shinto priestess appeared in the disaster area. Alice found this very strange under the circumstances and called to the girl. She requested that Alice tend to her friend, Ryoho. Not knowing the situation, she tried to refuse, but when she heard the girl mention that the earthquakes were their fault, Alice became intrigued and decided to follow her to find out more. Alice, having defeated Ryoho, demands to know what she was fighting against. Mana explains that Ryoho is a Dragon vessel and this his existence is so dangerous that he had to be sealed so the dragon wouldn't wake. But the seal had come loose recently. Alice puts two and two together and realizes the dragon's power had caused the Zoanthrope violence and earthquakes. Mana is glad that she understands and that it was strong Zoanthrope's such as her that were needed to reseal the dragon. She apologies to Alice for getting her involved in such a dangerous situation. Alice asks if the earthquakes will stop now and Mana assures her they will. Alice comments that it must be difficult just the two of them living alone in the temple, and since the place is now under the watch of the W.O.C. that she will have to check up on things. Jokingly, she asks if Mana would like her to bring cake next time. Mana gladly says yes.

Alice is a kind-hearted woman, who cares deeply about her friends and family. She has also shown feelings for the main character, Yugo. Although she is against violence, she will fight if it is to help someone she cares for.

Alice is a brunette in which her hair is brown similar to Yugo's, despite this she colors her hair to purple in the first three installments. She's a slender petite woman she's 158cm tall and weighs 57kg. Although she has american heritage from her father, Alice has more eastern appearance than western, she's petite, dark-haired, and brown-eyed.

In the first installment, Alice wears a very urban look, jacket, mini short in jean, biker gloves and running shoes, a style that she will develop throughout the series for more and more mature though she wears in Bloody Roar 2, a nurse uniform calling back her job. A drastic changes occurs in Bloody Roar: Primal Fury where Alice abandons her long back-length purple hair and styled into a medium-length brown hair. Her new look, clothes makes her less urban.

She has a signature look which is two ponytails until the fourth game. She always showing her legs during her fights.

In her beast form, the Rabbit, she often has a white fur and red eyes. She gains one centimeter and one kg. The top of her outfit is generally safe instead of the shoes, the pants or the skirt which are ripped or disappear. In the fourth game, most of her primary outfit disappear or shredded leaving her wearing only her white short jacket as her top while wearing her third outfit, most of her outfits are not safe and she may ended up left naked. Her beast form has a lot of similitude with the Florida White , a rabbit breed.

Yugo and Alice were childhood friends. During the Tylon events, they were allies against the multinational. Five years later, Alice met Yugo when he was brought into the hospital where she worked as nurse. But quickly he left the place. Concerned for his welfare, she chased after him to drag him back for treatment. Yugo was less than pleased with her fussing over him. However, they became close friends and participate together in the W.O.C. organisation. A love interest was never confirmed but the two have really strong attachment toward each other. Alice often worried about the risk he takes like during the Cronos Tournament.

Kidnapped by the company of Tylon, Alice managed to escape the organization before she could be brainwashed, but another girl, who tried to escape with her, wasn't so lucky. Her name was Uriko. Alice decided to fight back against Tylon and rescue the little girl who'd helped her escape. With Mitsuko, Uriko's mother, they managed to save Uriko and break the brainwashing. After that, Mitsuko adopted her into the Nonomura family so she could live out a peaceful life as a part of their family.

When Alice decided to fight back against Tylon to rescue Uriko she met Mitsuko, Uriko's mother. The two fight together against the corporation and the weapon which became Uriko. After Tylon annihilation and the rescue of Uriko, Mitsuko chose to adopt Alice into the Nonomura family so she could live out a peaceful life as a part of their family.

As a volunteer she work as translator in the organisation. Being a close friend with Yugo, she decided to follow him to participate in the activities of the Non-Government Organisation, the W.O.C and become one of the first member. This small volunteer group quickly grown into a commercial enterprise. Alice finds herself confused among the big changes occurring in the company.

In human form, Alice is a relatively weak character with poor range. Her only real advantage is her speed and evasive skills. However, in beast form, she gains incredible strength and jumping ability, making her a tricky opponent to hit. She is well balanced and easy to handle by beginners, despite that some of her moves are tricky to execute. Also, she is one of the few characters who has an air throw ability.

As a Hyperbeast, in Bloody Roar: Primal Fury and beyond, Alice gains Consecutive Hit Effect and Power Legs as her two Abilities Plus. Respectively, the ability to freeze the opponents' block ability and hit them continuously and the ability to have increased leg attack performance. Alice is the only fighter to have access to Power Legs as an Ability Plus.

Lifting Star Lane
Add a photo to this gallery 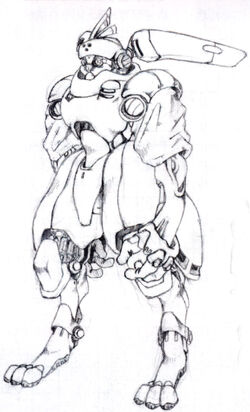 Alice is the only one to have a secret alternative costume in Bloody Roar. The famous Sailor Costume, a school uniform.
Retrieved from "https://bloodyroar.fandom.com/wiki/Alice_the_Rabbit?oldid=15350"
Community content is available under CC-BY-SA unless otherwise noted.