Bakuryu, real name Ryūzō Katō, is a fictional character from the Bloody Roar series. His beast form is the mole. He is only playable in the first game, Bloody Roar, though another character, Kenji, becomes the successor of the name Bakuryu for the rest of the series. Additionally, a "clone version" of him, Kohryu, was introduced in Bloody Roar 3.

"I have ascended to the rank of the Ultimate Soldier!"
— Bakuryu in Bloody Roar

Bakuryu (バクリュウ), real name Ryūzō Katō (加東竜三) is a fictional character from the Bloody Roar series. His beast form is the mole and he worked for the Tylon Corporation.

He is only playable in the first game, Bloody Roar, though another character, Kenji, becomes the successor of the name Bakuryu for the rest of the series.

Additionally, a "clone version" of him, Kohryu, was introduced in Bloody Roar 3. He died in the end of Bloody Roar, first installment.

Bakuryu is an assassin who works in cooperation with the corporation Tylon. All he wants in life is to be the strongest Zoanthrope to ever exist. To achieve this, he puts his body though many of Tylon's experiments to enhance his body. After, he proves himself being the best by defeating all his opponents, his body begins to dissolve due to how unstable his body had become from past experimentation. He can do nothing but to suffer in agony as he melts into a puddle of putrefied body parts. The scientists record the event and use the data for later experiments. 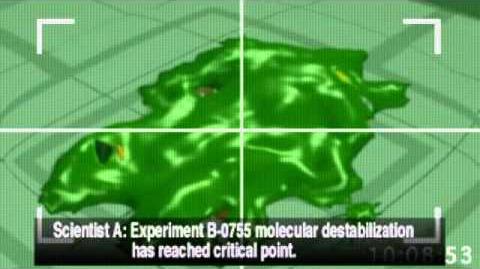 Bakuryu is a man of ambition. He is arrogant and obsessive with his lust for strength and power.

Ryuzo is a small japanese man of 1m53 with a large and very muscular body of 51kg. His face has strong features, the nose, the cheeks and the lips are prominents. His age had never been revealed but we can guess that Ruyzo is a old man because of his white hair and his wrinkles. His hair are shaved, there's only two bunches left. Also, he seems to have no pupils only plain white eyes.

Ryuzo has one red tatoo on his forehead, two drop-like figures with two triangles one above and one under, the illustration reminds the tajitu sign.

His unique outfit seems to be a modern variant on the traditional ninja costume with bright colors and metal ornements.

In his beast form, a Mole, he often has a light brown fur and blue eyes. His outfit is generally safe. Only some elements disappear like his shoes. His beast form has a lot of similitudes with the Mogera, a breed of mole.

Following the deaths of Kenji's parents, Ryuzo Kato, the first Bakuryu and founder of the Kato style of Ninjutsu, adopted and trained him for his services to Tylon. After the experiments of Tylon killed Ryuzo, Kenji took on the mantle of Bakuryu as his successor.

The robot Kohryu is but a flawed copy of what was once known as Bakuryu. Though Kohryu is not the same being as what he was developed from, he still has the same memories and fighting abilities as his original host.

He works as a mercenary for the corporation along with Long and Fox. In exchange, the corporation offers him to be stronger with military experiments on him. Bakuryu only works in Tylon for his desire to become the most powerful zoanthrope. In the end, the experiments turns against him and cause his death after Bakuryu accuses the corporation to have reduced him as a guinea pig, an accusation justified by a Tylon scientist who calls him Experiment B-0755 seeming to expected the fatal result. Bakuryu was, in fact, in a experiment series calls B-0755 class type and, after the failure, the corporation scientists chose to abandon their research on this series for concentrate their effort on a new prototype.

Bakuryu was one of the fastest character in the first Bloody Roar. He is a high risk/high reward character able to deal huge damage with his Izuna Drop combos but struggles to open his opponent up when they play defensively.

Since he is neither in Bloody Roar 2 or Bloody Roar : Primal Fury, Bakuryu doesn't have a Beast Drive or an Ability Plus.