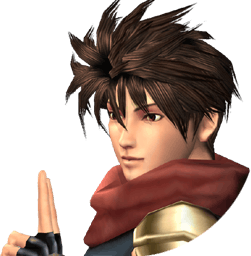 Bakuryu, real name Kenji Ogami, is a fictional character from the Bloody Roar series. His beast form is the mole. He made his first official appearance in the second game, Bloody Roar 2.

"I'm Bakuryu. The scourge of the night."
— Bakuryu in Bloody Roar 4

Bakuryu (バクリュウ), real name Kenji Ogami, is a fictional character from the Bloody Roar series. His beast form is the mole. He is currently a negotiator for the World of Co-Existence and is the adopted brother of Yugo.

He made his first official appearance in the second game, Bloody Roar 2.

Over the Painful Memories

He was born as the only son of a clan that worshiped the 'Earth God' in an isolated area outside of the urban cities. When he was young, he lost his parents and was taken into the care of an old ninja named 'Bakuryu'. He took the boy and left the village, with the intention to train the boy with the pure blood of the 'Earth Dragon' to become his successor. The boy was taught all the ninja techniques of his teacher and was conferred the title 'Bakuryu'. Together, they worked for the Tylon corporation as assassins until its fall. The original Bakuryu died, while his successor was left in a ruined building in vegetable state because of an incomplete brainwashing. He was saved by Yugo, who'd fought against Tylon's evil ambition. Yugo took the boy home, naming him 'Kenji' and adopting him as his 'brother'. Slowly, Kenji regained his health and humanity and began to settle into a peaceful life. However, five years after being taken into Yugo's care, the remnants of Tylon go after Kenji and kidnap him, reviving his memories as the ninja assassin 'Bakuryu'. He serves Busuzima, fighting anyone who opposes the ZLF (Zoanthrope Liberation Front). Even Yugo, but the latter affronts him and breaks the brainwashing, recovering Kenji's memories. He is horrified by what he has done under Busuzima's control and decides there is no reason left for him to live and prepares to die inside the burning ZLF headquarters, though it's Gado's words that spark some reasoning inside him, as well as the appearance of Yugo. He realizes that he has to carry on for his brother, and he with Yugo helping an injured Gado leave the burning building. After, Yugo and Kenji return home to carry on their normal lives.

Kenji wishes to live with his own identity, and decides to carry on, putting behind him a past he didn't choose. Recovering his humanity in the care of Yugo, Kenji carries on a peaceful life as a student as well as an aide to his brother in his activities in the non-government organization (NGO) that he runs called the World of Co-Existence (W.O.C.). But the peace is shattered by the appearance of the 'XGC' mark on his body. Kenji does not fear death, but knows Yugo cannot die because of such a thing, so takes on the role of 'Bakuryu' once more to protect his brother. He understood on his way that to see the end of the Tabula events, Xion should be finished off. After defeating him, Kenji and Yugo unite outside of the temple. He tells his older brother that everything is fine and there is nothing more for him to worry about. Yugo is suspicious about what has happened and wants to know where Xion is, but Kenji leads him away. Later, Kenji gives the tabula to Gado, who comments on how mature the young boy has become.

Kenji's carefree life is all thanks to the sacrifices Yugo has had to make for him. He has the choice of walking down a free road and choose how he wants to lead his life. Yugo sees his own life as having been led not for his own sake, but as leading it as an avenger for his father, guardian of Kenji, and leader of the W.O.C. He does not see this as a bad thing as he has had great experiences from his travels and seeing other cultures around the world. Kenji plans to enter the Zoanthrope tournament to prove that he has grown up. Yugo will go also to challenge him and plans not to hold back. Kenji finally wins against his brother but Yugo, playful, tells him not to forget who the boss is. Kenji can only laugh.

Kenji is investigating the earthquakes and Zoanthrope violence when he comes across a little white fox in the mountains. The fox walked before him, acting all puppy-like, though he considered the little animal to be a disruption from his investigations. He gives the fox food and tries to distract it, but whatever he does, the fox keeps following until he gives up and allows it to come with him. He wonders if the fox is worried about him, and at that second the little animal rushes off ahead. He follows and finds himself in a confrontation with a violent Zoanthrope. He realizes it was the fox that was trying to tell him about this as he takes to battle. When the violent Zoanthrope appears to be a dragon, Kenji is greatly surprised by the existence of such a myth and questions what exactly is going on. Mana quickly apologizes and tells him about Ryoho being a dragon vessel, sealed because of how dangerous his powers are. But the seal had come loose recently. Kenji deduces for himself that it was the cause of the Zoanthrope violence. Mana confirms this, also mentioning that to re-seal the dragon, she had to remove the broken one completely first. It was the strength of strong Zoanthropes such as Kenji that was needed to aid her. She apologizes for getting him involved in a dangerous event. He understands, saying that it was fine since he learned something from it. He becomes greatly concerned over Ryoho, who is sprawled out on the floor. Mana goes over to her friend, leaning in to him. She starts to giggle when she says that she thinks he's asleep. Relieved to hear this, he decides it is time for him to go, because he knows his friends will be worried about him. He excuses himself, performing his vanishing technique. Mana begins to say her thank you when he suddenly turns into a bobbing log and disappears. She jumps in shock, left to finish her sentence talking to thin air. 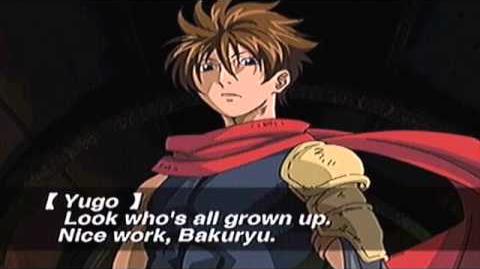 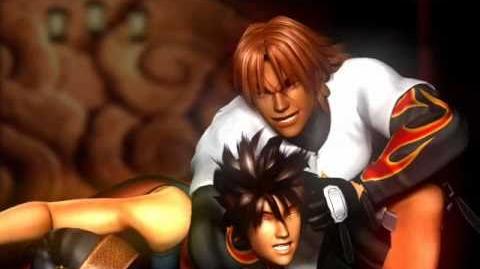 Kenji started out as a cold, arrogant and a vicious fighter. But this was only because of his brainwashing. Normally, Kenji is a quiet, serious, good-willed, though gentle, shy and studious young man. He is especially friendly and playful around his 'friends', Yugo, and Uriko.

Being the youngest fighter in the series, Kenji has softer features, appearing to have a muscular body while still having a slim build, weighing 47kg. In his debut appearance in the second installment, he has short bluish-black hair with bangs on the sides of his head and has a spiked bangs on the right side of his head. In Bloody Roar 3, Kenji seemingly sports short spiky hair shown in the promotional artwork as well as his in-game model. However, cutscenes throughout gameplay show Kenji having straight, shoulder length hair. Starting from the third installment onward, the color of his hair changes from bluish-black to brown. Bloody Roar 4, Primal Fury and Extreme, his hair becomes short with full fringes and has disheveled spikes upward as opposed to his step-older brother's hairstyle which are downwards. His eyes also change from gold to brown.

Being an assassin, and more exactly a ninja, Kenji shares his wardrobe between young Japanese boys his age. He is commonly depicted in his school uniform or in his ninja garb. In Primal Fury/Extreme, as a negotiator, he is seen in a white business suit.

He is also often shown wearing a red scarf.

In his beast form, a Mole, he often has a light brown fur and red eyes. His outfit is generally safe. Only some elements disappear like a part of the top or his shoes. His beast form has a lot of similitude with the Mogera, a breed of mole.

During the destruction of Tylon's base of operations, Yugo rescued from the surrounding rubble a boy, previously Tylon's guinea-pig. The boy had no memories and nobody to take care of him, so Yugo took it upon himself to adopt him as his brother and named him Kenji. Recovering his humanity in the care of Yugo, Kenji carries on an aide to his brother in his activities in the non-government organization (NGO) known as the World of Co-Existence (W.O.C.).

Following the deaths of Kenji's parents, Ryuzo Kato, the first Bakuryu and founder of the Kato style of Ninjutsu, adopted and trained him for his services to Tylon. After the experiments of Tylon killed Ryuzo, Kenji took on the mantle of Bakuryu as his successor. Since the interactions between Kenji and Kohryu are limited, it's difficult to say if Kenji knows that Kohryu is, in fact, a robot based on his previous trainer, Bakuryu.

They first met when Bakuryu defeated Long under Busuzima's brainwash. Uriko, who was Long's student, choose to avenge him but was defeated as well. It is unknown what happens afterwards, but when Bakuryu was freed from Busuzima's influence Uriko becomes very friendly with Bakuryu despite his shyness. Sometimes Bakuryu prefers to avoid Uriko's extrovert company.

Bakuryu is the fastest character in the game. His moveset involves a lot of his evasive and aerial movements to confuse the opponent. However, he is considerably weak, and he has to use his speed to his advantage to carefully poke his opponent. In beast form, he gains more effective strike moves and his beast drives are devastating.

As a Hyperbeast, in Bloody Roar: Primal Fury and beyond, Bakuryu gains Any Cancel A and Kenzuri A as his two Abilities Plus. Respectively, the ability to cancel any of his attack that use no more than one direction input and, also, the ability to cause damage even if his attacks are blocked. Alice is the only fighter to have access to the Kezuri A Ability Plus.

"I am Bakuryu, master of ancient art of ninja. At my master's command, I rain fear and death down upon the accursed zoanthropes."
— Bloody Roar 2
"Silence! Die!"
— Bakuryu's story
"I will do what must be done, no matter how horrible."
— Bloody Roar 3
"Houuuu... ready?! Good luck!"
— Bloody Roar 4
"I'm Bakuryu. The scourge of the night."
— Bloody Roar 4