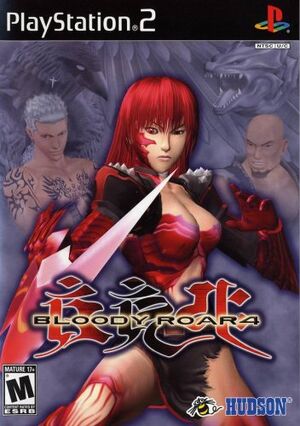 Bloody Roar 4 is the fifth installment of the Bloody Roar series released in 2003 by Hudson and Eighting. It's the first installment to receive a Mature Rating for realistic blood and violence and the first to use voice acting in cutscenes.

Bloody Roar 4 is a fighting game developed by Hudson Soft and Eighting and released on November, 2003 on PlayStation 2. It is the fifth and last installment in the Bloody Roar series.

It's the first installment to receive a Mature Rating for realistic blood and violence and the first to use voice acting in cutscenes.

"Throughout time, life forms on this planet have evolved and prospered. Some life forms do not evolve, but what is the cause behind the choices on who evolves and who dies? Gaia is a life form that is the entire earth, and it has a self-balancing nature and it is a way that the environment can be controlled. Mankind has taken on many forms though Gaia, though natural selection, as well as the Unborn: the life forms that would have survived if they evolved. Exactly one year ago, during the X-Genome Code Incident, there were many riots on earth by beasts that were not in the XGC. Soon it all ended and no one knows the true cause of it, but people began to blame it on a Stone Seal. The seal is locked away, but the riots have increased even more so. What is the cause behind it all, and can this be stopped?"

During the Tabula incident, a young woman, Nagi, was mortally wounded while trying to stop Xion. She survived but with the cost to let the power of the Unborn impregnate her, transforming her into a Zoanthrope like Xion. She then went into a search for his aggressor eager to come back to her normal self. Unfortunately, meeting Xion again and stabbing him only make The Unborn's influence stronger, letting the demon entity full control of Nagi's mind. As The Unborn's minions, Xion and Nagi were sent on a mission to weaken Gaia, the lifeform of the Earth itself and The Unborn's nemesis, by destroying her most powerful weapon, Ryoho the Dragon.

On the other side, Ryoho, because of the growing influence of The Unborn, is slowly losing control over his beast form but doesn't understand as he has no idea he is a Zoanthrope, to begin with. His beast form, the dragon, is so strong that each time the beast is claiming control, it is arising a power causing earthquakes all over Tokyo, sudden comas, and violence. Only Mana, a young Gaia priestess, can help him to keep control but her power is starting to not be enough. She looks for help and finds the members of the W.O.C. She explained to them that the Dragon's power had to be sealed again as the original seal had come loose. Making things more difficult, Ryoho and her discover The Unborn is after them through a mysterious "white Zoanthrope" which it's revealed to be Xion.

Xion and Nagi eventually found Ryoho in an underground temple, at this point the Dragon form gets so strong that Ryoho finally transforms. A long brawl occurs as Xion and Nagi fight against the dragon and Mana helps Ryoho to confront this same dragon in his own inner battle. Finally, Ryoho wins over his beast form and gets back but falls unconscious doing so. Defenseless, he is leaving at the mercy of The Unborn's minions. Fortunately, Yugo appears to fight them. After the last battle, Xion and Nagi are finally freed from the Unborn's influence when Mana gets the opportunity to cast a spell on them. Then, in a final move, Xion and Nagi combine their power to shatter the Unborn.

The world is now safe. With the Unborn vanishing and the dragon sealed again, the earthquakes and violence stopped. Mana puzzles over the fact the dragon didn't calm down when the Unborn was defeated. Ryoho then says that it's because Gaia didn't try to wake up the dragon to fight against The Unborn but to protect herself against what it's really most likely to destroy the planet, the humans.

This installment brings some drastic changes in the gameplay mechanics of the Bloody Roar series.

The Beast Gauge still remains in the series, which allows the player to switch to a Beast Form. However, unlike previous installments, the Beast Gauge can now be charged up with the Charge Power, by maintaining the Beast button, at the expense of health. In addition, characters can still Beastorize without the Beast Gauge being filled up completely.

The Beast and Health gauges are now intertwined, if his health meter is completely depleted, the player will automatically transform himself into his Beast form and fight with his Beast Meter as his, now, Health meter for the remainder of the round. In the same way, if the Beast Meter is empty during the Beast form, the fighter will automatically come back to his human form (if his Health meter is not empty too) without having to take a Guard Breaking attack from his opponent like in the previous games.

The Hyper Beast Mode returns also but can be attained differently than the previous games. This time, the fighter has to be in human form then uses the Charge Power until he spends all the remaining health. Once done, the fighter will transform into his Hyper Beast Form and remains in this form until the end of the round.

A new Career Mode allows players to take one character through a legion of matches. By winning matches, players can obtain 'DNA Points' which can be used to purchase ability enhancements such as strength and defense increase. It is even possible to purchase new moves for the selected character as well as use moves used by other characters, changing the flow of the character altogether. The character selected in Career mode can be used in normal play by pressing L1 to switch to the character's 'Career' mode. Hidden characters can be unlocked by achieving a certain number of DNA Points.

Bloody Roar 4 was co-developed by Konami during the period when Hudson was merging with the company. It was the first time that Hudson and Eighting were not the only organizations to develop a Bloody Roar game.

It is also the only opus in the series not designed with the Eighting's own fighting game engine, instead, Bloody Roar was developed on RenderWare, at the time, a popular engine among Playstation 2 developers.

During the recording of the character's voices. Voice actors, who will be criticized for their low-quality work at the release of Bloody Roar 4, were given few directions during their recordings. Most of them were not professional voice actors but actually musicians [1].

From the promotion images to the released game, Bloody Roar 4 changed at least three times the visuals of its HUD. Unfortunately, even on the final version of the game, unwanted gaps in the HUD sprites are still visible.

In its final version, Bloody Roar 4 was criticized for its bugs, low-quality/unfinished elements, and unbalanced gameplay. Prominent examples were the victory screen sometimes locking the game, voice audios being repeated over themselves or muted, character models phasing out, questionable AI, or some fighter's unfair advantages (Mana's Charge Power or Busuzima's overpowerful throw).

Speculation about a difficult and rushed development started to appear to explain these quality downgrades. Multiple elements support this theory. At the time of Bloody Roar 4 development, Bloody Roar: Extreme was still in production as the PAL version of Extreme was released at the same time as Bloody Roar 4 in Europe. Hudson was also following financial losses which would be leading to important resignations and the absorption of the company by Konami.

Bloody Roar 4 received generally mixed reviews from critics. On Metacritic [2], Bloody Roar 4 holds a rating of 59%, based on 25 reviews.

The game has sold 90 000 copies around the world and outside Japan [10], the lowest sales in the series. Its biggest competitor around its release date, Tekken 4, has sold 3.44 million of copies [11].

Douglass C. Pery from IGN [7] reviews Bloody Roar 4 as a decent 3D fighting game to please a hardcore gamer [and casual] for a day or two but the stagnant ongoing series is definitely in the second tier of fighters, way below Sega's, Namco's and Temco's seminal series, and it's seriously getting old and tired. He concludes: "The lack of depth and subtlety and the emphasis on the offensive, rather than the defensive, puts this squarely two notches below the best in the genre."

Killy, from Jeuxvideo.com [8], reviews with a "16/20" Bloody Roar 4 as an alternative to typical fighting games even if it is short in innovations.

Greg Kavashkin from Gamespot [4] says that "Bloody Roar 4 is a predictable follow-up to a series that's never aimed particularly high".

The principals negative points are mostly the poor and inane dialogue "The dialogue is all dubbed in English and is poorly translated, but it can be entertaining if for no other reason than its sheer absurdity" (Gamespot) and the major change on life/beast dynamic "All this is a strange dynamic that's not necessarily an improvement over previous Bloody Roars, in which you could only stay in beast form for a limited amount of time." (Gamespot)

For the promotion of Bloody Roar 4, Yuko Ogura a japanese actress, singer and model lent her image for a cat-themed photoshoot.

On June 2004, to celebrate the Japanese release of the game, 300 people choosing by lottery were invited to a meet and greet with the Yuko Ogura. The people could submit their name to the lottery by entering a special code found on the Bloody Roar 4 jacket on the official website.[12]

The event took place in Tokyo and Osaka and gave the opportunity to the participants to have picture with the actress, who appeared in her leopard costume from the photoshoot[13], and to collect trading cards. 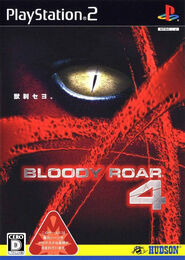 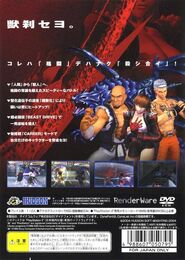 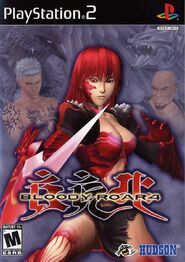 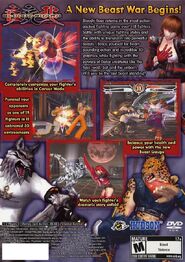 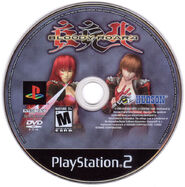