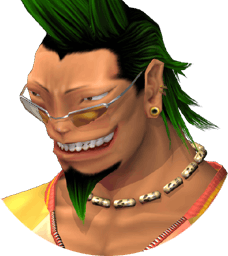 Hajime Busuzima is a fictional character from the Bloody Roar series. His beast form is the chameleon. He first appears in Bloody Roar 2, and, as a mad scientist, became recurring antagonist.

"Hehehehehe. The only thing tough about you is your face?"
— Busuzima in Bloody Roar 4

Hajime Busuzima is a fictional character from the Bloody Roar series. His beast form is the chameleon.

He first appears in Bloody Roar 2, and, as a mad scientist, became recurring antagonist.

As a child, Busuzima was curious about the internal mechanics of insects, dissecting them just to find out how they moved. His grandmother pointed out to him that the insect no longer moved because it was dead. Eventually, she too 'no longer moved', and Busuzima became very lonely. It was then that he became obsessed with the idea of immortality, beginning his slow descent into madness.

Many years later, Busuzima was employed by the Tylon corporation as one of their top researchers. It was during this time that he conducted unorthodox experiments on himself and became a Zoanthrope. At Tylon he befriended a fellow researcher by the name of Steven Goldberg, with whom he had a friendly rivalry. Eventually Goldberg became uncomfortable with the experimentation going on, enraging Busuzima, who felt his plans were being interfered with. He used his friend as a test subject for creating an insect Zoanthrope, believing that Goldberg would understand things better if he became a Zoanthrope himself. Unfortunately, the experiment was a failure, leaving Goldberg (now called Stun) in an unstable state. Soon after, Tylon fell to a group of Zoanthropes fought against the company to stop their experimentations. Over the next five years, Busuzima started his own group known as the Zoanthrope Liberation Front - ZLF - using Shenlong, a clone of the former Tylon assassin Long, as the front man, while he stayed behind the scenes, continuing to conduct his experiments and amassing a Zoanthrope army that struck fear into the hearts of confused humans. After a string of fights won against powerful enemies of ZLF, Busuzima believes that his power has triumphed over those who stand against him. Wrapped up in what he thinks is his greatest victory, he doesn't see Long, Alice, Uriko, Bakuryu, Jenny and Yugo behind him. Unfortunately for him, they get their revenge and leave him as a bloody pulp, though even this will not sway his ambitions.

Busuzima was once a head researcher for a company that planned to use Zoanthropes for military purposes, but their ambition was squashed by the Zoanthropes' rebellion. Left in despair, Busuzima hopes that the newly unearthed XGC code harbors a power worth harnessing. Tempted to discover the true powers behind the Tabula, Busuzima sets out to be his own hero. He, finally, procures the tabula and exults in his personal success. His celebrating is cut short when he finds himself surrounded by an army, and soon after, he gets jailed.He screams thats he wants to get out,but Busuzima said that some day he will escapes

Busuzima finds himself lost. His experiments to find an 'Ultimate Life Object' have come to an abrupt halt; he has found that there is a counter-reaction that shortens life. During the XGC incident Stun, who (as Goldberg) was an expert in the area, pursued Busuzima, but before he could reach him, his body gave out and he died, unable to complete his vengeance.

As Busuzima thinks this, Jenny opens the door of his laboratory, and he snaps at her, threatening to use her body in an experiment if she doesn't behave. He mentions that he is looking for research material for his study on immortality. In response she apologises for setting Stun on him during the XGC incident, and then surprises him by saying that Stun is still alive: he was reproduced in the kingdom of Zoanthropes, and will be participating in their fighting tournament. Delighted, Busuzima wishes to pursue his old friend... to pillory him. The two launches themselves into a fight that Busuzima win. The winner stands over his fallen friend, Stun, proclaiming that he is "all brawn and no brains". He takes the chance to steal the 'fruits' of the experiments within the Zoanthrope kingdom, obtained by the sacrifice of other Zoanthropes. As he is about to leave, he finds Stun looming over him. In his fright, he is unable to react quickly enough to avoid a gut punch, and crumples before the Insect.

A year after the XGC incident, Busuzima gives up his work, unable to get any good results, and slips into a lonely, depressive state. When the Zoanthrope Violence begins to emerge, however, Busuzima becomes suddenly resolute. He plans to capture a legendary animal, the dragon, to make a new kind of Zoanthrope. He heads for the mountains, where he sees a white fox that seems unaware of his presence. He remembers the legend of the nine-tailed fox, and in his excitement he decides to pursue and capture it. Following the fox, he enters in a asylum where finally falls into the dragon zoanthrope, Ryoho, and her protege, Mana, the Nine-taile fox zoanthrope and defeats both of them. Mana muses over the completion of a magic seal as Busuzima laughs, telling her that it is all over for Ryoho, and that now he will be taken away and experimented on. Then he pauses, and yells in horror, realizing what the girl has said about resealing means that Ryoho cannot change back into a dragon. Mana verbally confirms this. Busuzima exclaims that she can't do that, shocked that his plans have to come to naught. However, he remembers that the nine-tailed fox is still there, and decides to use her instead. Mana panics and runs away as Busuzima chases after her; but not for long, as he then runs away himself, with Mana, in fox form, attached to his rear. 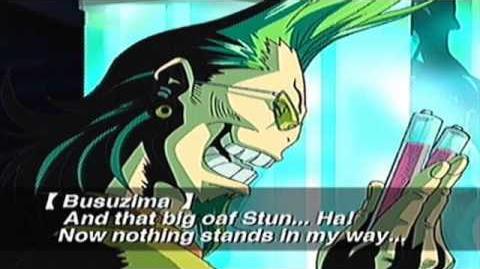 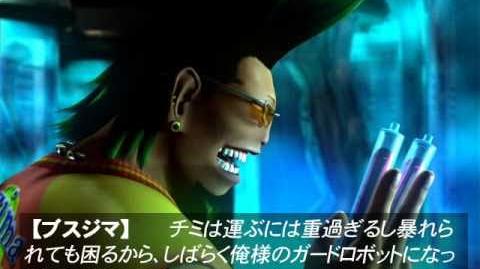 Busuzima is eccentric, devious and self-obsessed. Though a clever man, he hides his intelligence behind a mask of general lunacy and intense bravado. He is obsessed with being the best, and wants people to understand the power of his genius; however, usually because of his crude attitude, he tends to alienate everyone around him. So far he has antagonized most if not all of the BR cast members in one way or another.

Busuzima is a tall Asian man in his thirties with a lanky build and a reptilian-looking face. He has green hair styled into tall spikes that resemble a chameleon's horns as well has having a green goatee. In Bloody Roar Extreme/Primal Fury, his hair is modified with a similar style but also doubling as a mullet. He usually wears Hawaiian shirts, athletic shirts, shorts and sandals. Strangely enough, he has an extremely long tongue in his human form. His beast form appears as a giant green chameleon, who had a straight tail in Bloody Roar 2, but curls in subsequent games.

Busuzima and Steven Goldberg were employed by the Tylon corporation where the two had a friendly rivalry. Eventually Goldberg became uncomfortable with the experimentation going on, enraging Busuzima, who felt his plans were being interfered with. Busuzima used Goldberg as a test subject for creating an insect Zoanthrope, believing that Goldberg would understand things better if he became a Zoanthrope himself. Unfortunately, the experiment was a failure, leaving Goldberg (now called Stun) in an unstable state. Goldberg, now called Stun, slowly lost his mind and soon the only thing left of his old self was a violent desire to revenge himself from Busuzima.

In the same time, the research conducted by Busuzima, forces him to admit that he needed the help from Goldberg, the latter being an expert in area where Busuzima was failing, but what remained of the brilliant scientist was, as Busuzima said, just "all brawn and no brains".

His creation, but later became his boss.

Busuzima is a hard character to use. He is slow, and relies more on his ability to dodge out of the way of attacks to engage in a counter strike rather than a full frontal attack. In his beast form, he can cloak himself to confuse his opponents and he can gain the advantage. Such a technique is especially successful with his beast drive "Busuzima's Mandala", which gives him the ability to warp from side to side to strike. This is very hard to avoid.

Appears in Bloody Roar 3 onwards as an extra Beast Drive.