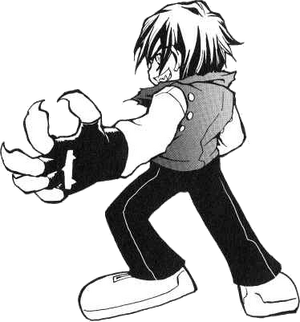 Fang, real name Yuga Tsukigami, is a fictional character from the Bloody Roar series. His beast form is the wolf. He is a bonus character in Bloody Roar Extreme. He originates from the manga, Bloody Roar: The Fang.

"This time... Victory is Mine."
— Fang in Bloody Roar: Primal Fury/Extreme (Translated from Japanese version)

Fang, real name Yuga Tsukigami, is a fictional character from the Bloody Roar series. His beast form is the wolf and he's working as freelance occult journalist.

He is a bonus character in the worldwide Xbox and Japanese GameCube versions of Bloody Roar Extreme. He originates from Maruyama Tomowo's manga, Bloody Roar: The Fang.

Fang is the main protagonist, where he's working as a freelance journalist. While following leads on Zoanthrope like him causing trouble in their area, he is joining by a young school girl, Mashiro.

Eventually he has to face off against a dark creature that was brought to life by the joining of four talismans. Fang, using special gloves, can break the beast transformation - he uses his power to defeat the evil entity.

After being invited to the tournament in the Zoanthrope Kingdom, Fang and Mashiro, visit the kingdom expecting to learn more about the competition. They come across Yugo who is fighting against a group of men. Fang comes to help and him and Yugo win against their opponents. Suddenly, the prince of the kingdom, Cronos, asks them to stop fighting in public. Fang takes the opportunity to talk about the tournament and its cash prize saying that it could bring the wrong type of people. Things get heated between the Prince, Yugo and Fang, in response to that Cronos' bodyguard, Ganesha, steps in. A fight begins where Ganesha, Yugo and Fang all transform into their beast form. Impressed, Cronos, at the end of the fight, shares his impatience to see them at the tournament.

Fang, who now understands that Yugo was the man behind the destruction of Tylon years ago, shows his respect and both of them wish luck to the other for the upcoming competition.

He is very much like Yugo. He appears cocky and overzealous, though has very heroic qualities - a strong will and great determination to protect people around him. He appears somewhat dimwitted at times, but is usually on top of things when they get dangerous.

Fang met Mashiro during his investigation on the recent murders. He saved her from a cat zoanthropes and in the same time both discovered that each of them was a zoanthropes. Mashiro was strangely attract by him since she saw Fang in her dream before met him in real life so she choose to follow him in his quest for the talismans. They become real close friends and develop live interest for each other, like proved in the Mashiro's jealousy when Fang get acquaintance with a new girl. Their love was never confirmed by the characters.

Fang is a secret alternative costume for Yugo in Bloody Roar: Primal Fury. In this point of view, his moveset is very similar to Yugo with a few of his own moves and chains. As his gameplay don't use stance as much as Yugo, he is seen as easier to use.

As a Hyperbeast, Fang, like Yugo, gains Any Cancel A and Consecutive Hit Effect as his two Abilities Plus. Respectively, the ability to cancel any of his attack that use no more than one direction input and the ability to freeze the opponents' block ability and hit them continuously.