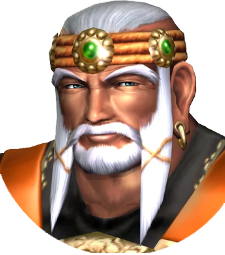 Ganesha, real name Golan Draphan, is a fictional character from the Bloody Roar series. His beast form is the elephant. He only appears in Bloody Roar: Primal Fury/Extreme.

Ganesha (象头神) real name Golan Draphan, is a fictional character from the Bloody Roar series. His beast form is the elephant.

He only appears in Bloody Roar: Primal Fury/Extreme where he is Cronos' bodyguard.

Ganesha didn't know what to do. He had won all the local tournaments and qualified for the national competition. But he knew if he beat all the guest warriors, he would be a rival against Cronos. He knew he had to do it. He thinks back, to a chaotic day some time ago. Burning houses... Frightened people trying to escape... A child growing cold in his arms... A monster standing among the flames... It was humans to start wars like this, but it was that monster that derived everything. He mutters, 'Prince Cronos' to himself...

In his plan to revenge, Ganesha became the Prince's bodyguard waiting for the tournament as a good opportunity to defeat him in a match and make him suffer for the destruction of the village. Ganesha, finally, defeated Cronos during their duel. Surprised to see the Prince crying, he apologized, saying it was the only way. he started to explain that he will understand one day when he is suddenly attacked by Cronos, now in his phoenix form. Ganesha weakly reached out to him before passing out. It's still unknown if Ganesha survives to the attack. 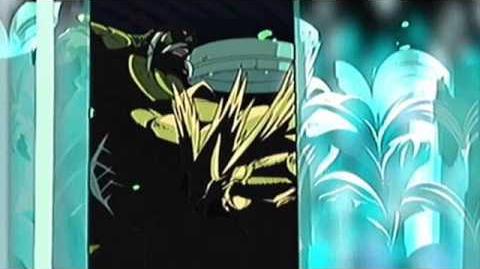 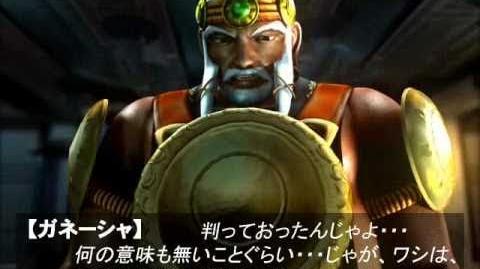 Ganesha is generally pompous and snobby to anyone who isn't Cronos, whom he cares for a lot. He's a tough man with stiff morals, sticking to what he believes is right.

Ganesha is a tall, elderly man with a stocky build, tan skin, white hair and beard, and blue eyes. His beard is shaped into tusks that resemble an elephant's as well as possessing ear piercings which cause his earlobes to droop downwards, also giving the appearance of an elephant. Although his ethnicity is not known, his dress, nickname, and stage could give hints that he is of Indian origin. However, his real name exists in Hebrew. His attire consists of ceremonial pants and armor.

In his elephant form, he has gray skin, and a broken tusk. His beast form has more similarities with the Indian Elephant.

Ganesha assisted in the destruction of his village and gave the blame to, his prince, Cronos, already his rival since Cronos is considered the best fighter of the kingdom and the ultimate opponent for any fighter who wants to really succeed. It's not clear why Ganesha accused Cronos of the attack on his village and why he became subsequently his bodyguard but Ganesha has a plan and wants him to pay for his fault. In the end, it's Cronos who defeated Ganesha after the latter revealed his true self.

His inability to use strings makes him a very tough character to use. He is also very slow, thus making him very hard to control. His advantage comes with his high damage and the ability to chain all his normal into specials. Most of his gameplay tactics rely on him being able to pull off throw combos, which can take off a large amount of the opponent's life bar. He is not recommended for beginners.

As a Hyperbeast, in Bloody Roar: Primal Fury, Ganesha gains Any Cancel B and Super Armor as his two Abilities Plus. Respectively, the ability to cancel any of his attacks and the ability not suffer any hit stun when taking a hit.

In an interview for V-Jump Books that appears in the Bloody Roar 2 guide, Kenji Fukuya, Director of the Bloody Roar series, said that his Beast Form would be the Elephant. He later says when asked about adding an Elephant Zoanthrope in the game that it was a well-known fact that he supported this idea. [1] making reference to the V-Jump interview.

The idea of an Elephant Zoanthrope get more serious in April 2001 when the Bloody Roar Official Japanese site launch a poll where fans were asked what Beast form they like to see. Among the top ten result, number 7 was an Elephant [2].

This fact can poll can be assimilated to the origin of Ganesha.