Fox, or Hans Taubemann, is a fictional character from the Bloody Roar series. His beast form is a Fox and he worked as an assassin. He is only playable in the first game of the series.

"Ugly beasts must be weeded out of this world!"
— Fox in Bloody Roar

Fox or Hans Taubemann (ハンス・ターブマン ) is a fictional character from the Bloody Roar series. His beast form is a Fox and he worked as an assassin for Tylon Corporation.

He is only playable in the first game of the series.

The young boy, Hans, under the name 'Fox', is an assassin for the Tylon Corporation. He was a child of the streets and developed a disturbing love for blood and killing. He dislikes his Zoanthrope side, seeing it as a very ugly form. One day, Fox was taking his wrath out on a group of people. A woman who he had just fatally injured calls out his real name; It was someone who Hans wished could have done better for him. It was his mother. She died right before his very eyes. Fox couldn't believe what he'd done. His actions drove him to insanity as he laughed into the night. 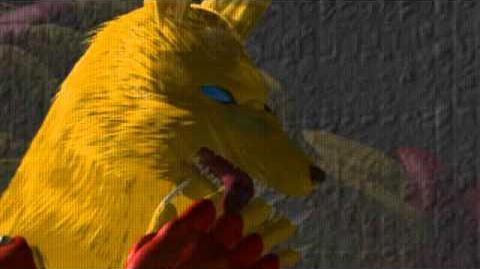 Fox is an effeminate and bloodthirsty killer that doesn't care about anyone or anything. He is a very vain young man with obvious cross-dressing tendencies. He is also obsessed with beauty and declares all else ugly.

Fox appears as a tall, young Caucasian male with a feminine face and athletic build. He has blonde hair and blue eyes.

He tends to wear a spandex vest, gloves, jean shorts and a pair of boots.

His beast form takes some cues from the Swift Fox.

He worked as an assassin for the Tylon Corporation as an opportunity to kill more people.

In the first Bloody Roar game, Fox happened to be one of the fastest characters in the entire game, with quick strikes, but lacked in strength, only chipping away at the opponent's life bar. Most of his move list and animations were later passed down to Jenny the Bat, who first appeared in Bloody Roar 2.

"The sight of blood excites me!"
— Victory quote