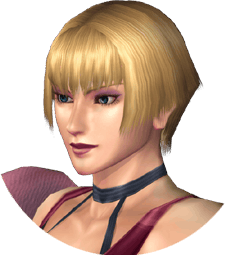 Jenny Burtory is a fictional character from the Bloody Roar series. Her beast form is the bat and she's currently a Model and Secret Agent. She made her first official appearance in Bloody Roar 2.

"You're sexy when you're in pain."
— Jenny the Bat in Bloody Roar 2

Jenny Burtory is a fictional character from the Bloody Roar series. Her beast form is the bat and she's currently a Model and Secret Agent.

She made her first official appearance in Bloody Roar 2 as the femme fatale of the series.

A woman surrounded in mystery... There are stories about her. Some say that because of an incomplete experiment, she has stopped aging, and others say she is a real-life vampire from Hungary. Though what is true, Jenny is a top model. Though in truth, this is but a cover for her secret life - her occupation as a covert spy. Her skills are impressive enough for top companies to fight to seek allegiance with her. One day, Jenny is invited by Gado, an old acquaintance of hers, to investigate a suspicious organization. To kill her boredom, she takes up the invite and slips out into the cover of night. She finds Gado after his fight against Shenlong and rescues him from his wounds. Later, after Gado is patched up, he hopes that the amount for her assistance is enough. He feels bad for having involved her in things outside their agreement and wants to pay her a bonus for her extra help. She admits that the run-in with the ZLF (Zoanthrope Liberation Front) and rescuing him was unexpected, but she tells him a contract is a contract. He finds this uncomfortable, saying that others in her line of work would be happy for the compensation. She says she's making him an exception because she owed him a favor, though she doesn't know what to do with herself now. He asks her if she'd be interested in nursing his injured self. Of course, he'll have to pay a special charge for that.

Jenny is Europe's top beauty queen. Few know of her true occupation in life. This top International spy has uncovered secrets in many global incidents, and her next task looks into the havoc of the 'XGC' mark. She believes that nobody else should carry this mark besides herself and the man behind it all. For, in the end, only one person can have the power of the Tabula of a Thousand Beasts. Across from a billboard picturing Jenny's latest modeling work, she discusses with business suits about the incident concerning the tabula. Unbeknownst to them, Jenny keeps most of her knowledge about the power of the item to herself. Thus hinting her having become possessed by the energy within it.

Jenny finishes her shower. As usual, the water is nearly hot enough to scald her skin, but she does not mind. Many times she admires her nude body and compares it to that of the glittering night sky. Though she looks in her late twenties, deep down, she knows the truth of her situation. An ageless creature, forever frozen in time. She stares at herself in the mirror, knowing that she must hurry now. It is not good to be late for an appointment, because time is crucial for the customer of a contract. The contract takes her into a Zoanthrope tournament. With her fighting skills, she makes through multiple adversaries before a meeting in a final battle against Gado. Jenny defeats Gado in, what's look like, a secret lab. He collapses to his knee, trying to regain his blurry vision on the woman when suddenly from behind her, a hand comes from the shadows. She turns, but not quick enough to escape the grasp of her new opponent. It turns out to be Stun. She is surprised because she and Stun were supposed to be good friends. Confused and failing to fight back, she calls out to Gado for help. The other man stands, calling on his beast power. Jenny can't take the pressure any longer and passes out. When she awakes, she is no longer in the lab but outside at night with Gado resting on top of her unconscious. He has bullet wounds to his body. She touches him softly, thanking him before looking up towards the calm night sky.

In her normal life, she is the top model of high society. Secretly, one of the best infiltrating operatives that have made her name in the spy world. Her latest mission is leading her to find out the truth about the 'Water Dragon' and the 'Nine-tailed Fox' that exist in Japanese legend. Jenny, who doesn't believe in legends, decides to relieve her boredom by going to investigate into the stories she'd heard. Though after a week of searching, she could find no information. Just as she was about to consider fabricating her report, a small fox passes her by. She knows she can't overlook it and sets out in search of the white fox. She finally finds the true which take her into an old temple with the young Zoanthrope Mana and her guardian, Ryoho. Jenny finds it hard to believe that both a 'Water God' and dragon exist within the temple. Mana insists on telling her everything - that Ryoho is a dragon vessel, whose power is dangerous and that her family, the Nine-tails have continuously kept it sealed so that it wouldn't awaken. Though unfortunately the seal came loose recently and caused the earthquakes and Zoanthrope Violence. Jenny finds the story an unexpected surprise. The little girl asks if she could quiet about the dragon because its power is something that couldn't be controlled by humans. Desperately, she admits she doesn't care about herself but does so for Ryoho. Jenny is impressed by her mature words, though she is unfortunate, because she is a pro in a clever game of words, and now that the truth is out, she will have to report it. Mana can't believe it. Leaning down, Jenny picks up a rock fragment off the floor and starts to recite what she plans to put in her report - that what she found there was this rock guarded in the mountain temple was by a strange parent and his child, and that was about it. Mana is surprised by what she hears, grateful to realize that she is not going to say a word. Jenny says goodbye and begins to walk away. as Mana says her "thank you" and while she says her name. Jenny pauses, smiling to herself as Mana's "thank you" while following her out. 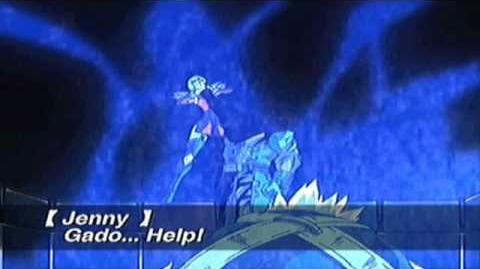 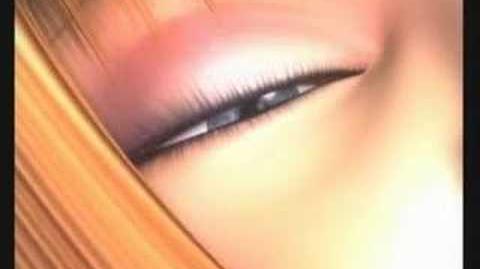 She appears very confident in herself and has an air of sophistication about her. Besides that, she seems to revel in her own glamor and importance and looks down on anyone who isn't willing to see things her way. She does her best to inspire confidence in others though tends to tease people at the same time. Underneath what could be called a snobby exterior is a soft-hearted woman, who values those she holds close.

Jenny is a slender tall woman (170cm for 52kg), physic that matches her model career. She bears blue eyes and her hair, done in a short bob, is blond. Compared to the other female fighters, her face appears to look more mature which is emphasized by her makeup: red lipstick and smokey eyes.

Jenny has the most revealing outfits of all the women in the Bloody Roar series, with a lot being tight and with emphasis on her legs and breast.

In her beast form, the Bat, she keeps nearly the same height and weight. Despite her arms becoming bat wings and the appearance of animal ears, fur, claws, and yellow eyes, Jenny appears to keep a majority of her human traits. It is also when Jenny is at her most revealing; most of her clothes are shredded away, with only her fur to hide her private parts. Her beast form has a lot of similarities with the Vampire bat.

Jenny and Gado are old acquaintances with an on-and-off relationship. They share respect and care for each other but also confront each other with their two very opposite ambitions. Jenny wants a luxurious lifestyle and by doing so she works mainly for the money whatever how amoral her mission could be, Gado on the other side wants to defend Zoanthropes'rights, everything he does turn around this goal. This conflict appeared during Bloody Roar: Primal Fury, when they both had the same goal (investigating King Orion's labs) but with very different endgames leading them against each other.

There is a romantic subtext in their relationship. Without being explicit, Gado frequently spends time with Jenny, at her place or on the street. Together, they are honest with each other. At the end of Bloody Roar: Primal Fury, Gado saves Jenny, despite their earlier fight, nearly killing himself doing so. We later see Jenny taking care of an injured Gado.

Jenny is a strong rush-down fighter with unrivaled aerial mobility and devastating air combos. In human form her twist stance allows her to apply pressure and build beast power quickly. Her back dash moves her upper body hitbox far back making it a great evasive tool. In beast form her range, power and mobility are augmented greatly and she gains the ability to fly allowing her to escape various air mixup situations. While she has some of the highest damaging air combos in the game her launchers are highly telegraphed and good players can easily avoid them, Jenny players will have to play smart and make use of her guard breaks and cancel to land an opener, a properly placed combo can dominate enemies with almost no chance of fighting back.

As a flying Zoanthrope, Jenny is one of the few fighters able to do air dash in her Beast Form with Reiji. As long as she is in airborne, Jenny can repeatedly do air dash but will lose height doing so but, in comparison, the loss will be more important than during a Reiji's air dash.