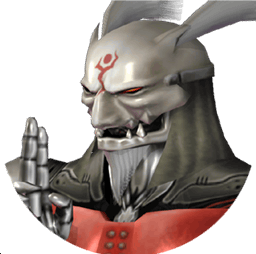 Kohryu is a fictional character from the Bloody Roar series. His beast form is the Iron Mole making him the only robotic Zoanthrope in the roster. He appears as a secret character, unlockable in all games since Bloody Roar 3.

Kohryu (紅竜/コウリュウ) is a fictional character from the Bloody Roar series. His beast form is the Iron Mole making him the only robotic Zoanthrope in the roster.

He appears as a secret character, unlockable in all games since Bloody Roar 3.

The predecessor was the assassin named Bakuryu. His real name was Ryuzo. He worked for the corporation Tylon, where he underwent many experiments to reinforce his body. But these repeated procedures eventually overcame his body and he decomposed. The liquefied tissue that was left was saved after his death. The 'YUN CHI Manufacturing, INC.', once a department of Tylon though is still active even after the fall of their main office. 'YUN CHI' manages to produce a battle robot called the 'Iron Mole', which they produce on a trial basis with the original Bakuryu's battle data and his liquefied remains that retains his physical strength. But they lose control of the robot during a trial run and start to attack any Zoanthrope in its path as if there are some underlining intentions.

Kohryu doesn't really have a personality. He is a cold, relentless machine that has an unknown vendetta against Zoanthropes, particularly that of the second Bakuryu (also known as Kenji).

Kohryu is but a flawed copy of what was once known as Bakuryu. Though Kohryu is not the same being as what he was developed from, he still has the same memories and fighting abilities as his original host.

Based on what happened to Kohryu's original host, Kohryu appears to have vengeful and aggressive tenancies towards Kenji (as evidenced by their encounter in the fourth game). He want's nothing more than to make Kenji pay for betraying his former master and for getting him killed as a result.

Kohryu is related to Bakuryu and Kenji has he shares a lot of similar moves and abilities. Despite the resemblance, Kohryu can be more attractive than Bakuryu in terms of gameplay. He has more health than Bakuryu and his heavier weight (in Human and Beast form) can be an advantage depending on the strategy. Kohryu's Spiral Kick (

) which is a variation of Bakuryu's Smoke Spiral Kick is a little more useful as, if positioned correctly, Kohryu's move can cross up the opponent. Kohryu has also one of the better range for throw attacks in the series.

As a Hyperbeast, in Bloody Roar: Primal Fury, Kohryu gains Any Cancel A and Super Armor as his two Abilities Plus. Respectively, the ability to cancel any of his regular attacks and the ability to not suffer any hit stun when taking a hit.