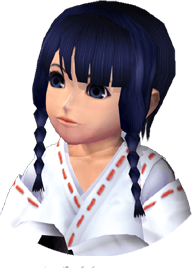 Mana Kamishiro is a fictional character from the Bloody Roar series. Her beast form is the Nine Tails fox. As a part of the rooster, she has the particularity to be an NPC that acts as part of a tag team with Ryoho, with Mana serving as the zoanthrope transformation.

Mana Kamishiro (神城眞那) is a fictional character from the Bloody Roar series. Her beast form is the Nine-tail fox. As a part of the rooster, she has the particularity to be an NPC (non-player character) that acts as part of a tag team with Ryoho, with Mana serving as the zoanthrope transformation.

She first appears in Bloody Roar 4 as a guardian of the dragon temple, she is tasked to keep the dragon's seal.

Mana belongs to a secret temple that supports both the Buddhist and Shinto religions together (it had managed to escape the Meiji Restoration law that separated Buddhist and Shinto religious activities). She took over the role of her sister as her duty to the ninetails family to guard the seal of Gaia's dragon. Ryoho, the dragon vessel whom she is guarding, lost his memories of the events that occurred during the tabula/XGC incident the year before and did not know of his own powers. Mana is taken under his care and, unbeknownst to him, she makes sure that the dragon stays sleeping behind the seal. Before she joined Ryoho, she had been the target of interest of unsavory types after the power ninetails. The monk's protection warded away any followers who finally left her alone. A year after the XGC incident, Mana feels the seal start to come loose. The power of the Unborn is growing and the dragon is disturbed. Because of the dragon's immense power, earthquakes and Zoanthrope violence begins to occur. The Unborn attacked the secret temple the year before and the dragon appeared, leaving it up to Mana's sister to seal it. Mana pushes aside her doubts, knowing that she must find strong Zoanthropes to help her reseal the dragon. As she and Ryoho set out on a journey to protect their temple, she knows that Ryoho will soon learn the truth about himself... [...] Mana helped guide Ryoho to defeat the Dragon within himself. He awakens to find her standing over him, assuring him that the dragon has been resealed. She also admits her knowledge of the dragon and the seal when he asks. The dragon was released by the Unborns attack the year prior. The Unborn was defeated but the dragon's power was too much for it to exist and the guardians and Mana's sister fought the dragon and re-tested the seal. At that time, Mana was too weak and could not handle the power so her sister had to handle the responsibility of the re-sealing. Ryoho feels guilty because of what happened and asks to know what the connection is with the dragon. The dragon, as she explains, was made by the life force of the planet to defend it from anything that potentially threatened to damage the world. Because of this, the dragon held back the Unborn. Mana puzzles over the fact the dragon didn't calm down when the Unborn was defeated. Ryoho says that the things most likely to destroy the planet are humans.

Mana is a very sweet little girl. Kind and understanding, she wants to do what's best for people, especially Ryoho, whom she sees as a father figure. She is also very intelligent, filling people in when they are confused - as most of the Bloody Roar 4 cast are concerning the incited incidents. Even though she acts mature, she really is just a little girl, who wants to play and eat cake.

In her beast form, the Nine-Tails, she becomes, by default, a small white fox with blue eyes. Her transformation makes her the smallest beast form of the game and the closer to a real animal instead usual anthropomorphic form. As her human clothes disappear, the fox is only wearing a necklace with three green stones. Despite being called the Nine Tails, a mythical fox entity, her fox form has only one tail giving her a lot of similitude with the Red fox, a fox species, especially in her second outfit where the fox fur is orange and white which is more current for the species.

Mana works as a tag-team with Ryoho, the team is named "Ryoho & Mana the Nine Tails". In human form, she mostly distracts opponents for Ryoho to follow up with stronger attacks. She is not controlled by the player, the player plays with Ryoho. However, in beast form she gains an offensive moveset with the "beast button". Her beast attacks consist of jumps and bites.

The Seal -  This Beast Drive functions differently depending on the state the opponent is in:

Aura -  Ryoho uses a powerful uppercut to send the opponent in the air. While airborne, Mana conjures a large sphere of magic, and shoots it at the opponent.