Mitsuko Nonomura is a fictional character from the Bloody Roar series. Her beast mode is the Boar and she's currently a shop keeper. She is only playable in the first game of the series, despite an appearance in the second installment.

Mitsuko Nonomura is a fictional character from the Bloody Roar series. Her beast mode is the Boar and she's currently a shop keeper.

She is only playable in the first game of the series, despite an appearance in the second installment.

Mitsuko is a Zoanthrope who lived amongst the humans with her daughter, Uriko, keeping her Zoanthrope abilities a secret. Uriko began to show the potential for becoming a Zoanthrope and became the target of the organization, Tylon, who wanted to create their own army of beast soldiers. Uriko is kidnapped by the organization for their experiments. Enraged, Mitsuko pursues Tylon relentlessly so she can rescue her daughter and return to their peaceful life. [...]Mitsuko is reunited with her daughter. Uriko wails in her mother's arms as Mitsuko cries with relief. She tells her daughter they are going home now. And the pair return to their normal lives. Mitsuko is preparing food one morning. She calls upstairs to Uriko, hoping she is up and ready for school. Though on inspection, Uriko is still tucked up in bed. Mitsuko flings back the covers, demanding Uriko to get up.

Playing Uriko's story in Bloody Roar 2, Mitsuko is shown on the ground being surrounded by Shenlong and other men from the ZLF in front of her daughter. She's finally liberated by Uriko. 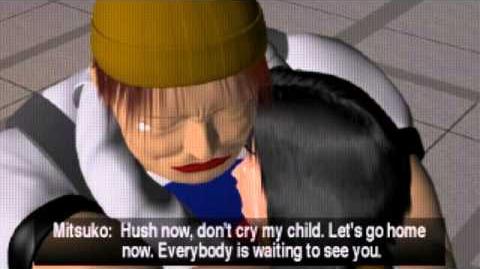 Mitsuko is a no nonsense woman. She won't let Uriko get away with too much. It's mentioned in later games that Uriko is kept under curfew. She is a serious and a violent woman, though she has a very loving heart, doting very much on Uriko and Alice.

Mitsuko is an tall, Asian woman with rather masculine facial features and a very muscular build. She has dark red hair, brown eyes and is almost always seen wearing overalls. Her muscular beast form takes cues from the Eurasian Wild Boar.

Uriko is Mitsuko's only daughter. Mitsuko seems to raise her daughter with strength, but she is very attached to her. When she was very young Uriko was kidnapped by Tylon Corporation and Mitsuko was determined to free her daughter despite the risks. When the two get back together, it was Uriko's turn to prove how strong their family link is, when she learn to fight and control her beast form, to rescue Mitsuko from the hands of the ZLF.

When Alice decided to fight back against Tylon to rescue Uriko she met Mitsuko, Uriko's mother. The two fight together against the corporation and the weapon which became Uriko. After Tylon annihilation and the rescue of Uriko, Mitsuko chose to adopt Alice into the Nonomura family so she could live out a peaceful life as a part of their family.

Mitsuko is a very strong powerhouse character, many of her attacks dealing plenty of damage to the opponent's life bar. She is somewhat slow. Many of her moves have been given to Stun the Insect, who first appeared in Bloody Roar 2.