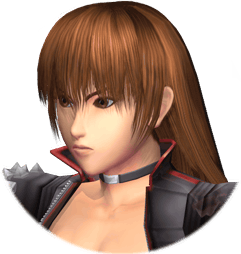 Nagi Kirishima is a fictional character from the Bloody Roar series. Her beast form, Spurious, in biological terms, means a structure that has a comparable appearance but nonetheless has a diverse structure. She appears as one of the main characters in the Bloody Roar 4.

"Why don't you hurry up and return me to my original body!"
— Nagi in Bloody Roar 4

Nagi Kirishima (桐島凪) is a fictional character from the Bloody Roar series.

Her beast form, Spurious, in biological terms, means a structure that has a comparable appearance but nonetheless has a diverse structure. This identifies what she shares similar powers with the Unborn.

She appears as one of the main characters in Bloody Roar 4.

During the XGC and Tabula incident, Nagi was mortally wounded while trying to stop Xion, who was on a rampage against the Zoanthropes to absorb power for the tabula. It was during this time that Gaia copied the Unborn powers and created 'The Spurious' in order to try and seek out the Unborn and absorb it into the body. With this power inside Nagi, she was able to survive the attack, though the power stayed dormant because Yugo and the others overcame the incident.

A year later the destruction of the Tabula, Xion was taken over by the Unborn, and 'The Spurious' began to awake. Nagi wanted to know more about this strange power that had awoken within her but also wanted to find again her life as a human and not a Zoanthrope. She then set out on a journey to find Xion, convinced that he has the power to give her "original body". When she finally finds him, Xion sees in her the power of the Unborn who was given to her by Gaia after she was attacked by him. As she calls her an impostor and threatens her to use her power against Gaia, Nagi stabs him but, doing so, she becomes overcome by the power of the Unborn.

Now controlled by the Unborn, Nagi goes to the temple to find the power of Gaia and destroy it. She finds Ryoho the beacon of Gaia's power, that she defeats and, as she is now ready to finish off him, she raises up her blade, shouting her goodbye to Gaia's dragon. Though she is interrupted as Yugo comes charging in on the scene. Nagi looks over her shoulder in shock as Yugo punches her across the room. The force separates Nagi from the Unborn spirit, which can't believe what has just happened. Mana seizes the moment and traps the Unborn with her powers, though she can't hold him for long, begging for someone to destroy him. Nagi wakes up at that point, free of the influence and clearly in shock. Capitalizing, she lets out a cry and drives her blade arm through the Unborn. The spell shatters, as does the Unborn. Nagi collapses with exhaustion. When she awakens, Yugo and Mana are stood over her. She asks where she is and what happened. Yugo can't find the words to explain, so Mana takes over. She tells Nagi that her Unborn powers were given to her so she could defeat the White Zoanthrope, but she was taken over and came to destroy the dragon - The dragon's purpose was to protect the world but ended up causing all the trouble. Mana says its thanks to Nagi that the evil is destroyed and the dragon is resealed again, though Nagi can never become human again. Nagi says that she shouldn't go through the trouble, that she will accept it as a part of her from then on. Though she does have a bone to pick with Yugo, raising her blade at the surprised man as she asks if he just beat her up. He gulps as he tries to find a good explanation, but the moment is easily ruined as the three hear Ryoho snoring behind them, and they are all overcome with laughter.

She has a very passive nature. She can appear somewhat broody at times, though underneath she is a playful young girl with a good heart. This is shown in her ending when she is joking with Yugo and in one of her win poses when she crouches, giggling as she asks her fallen opponent if they want another shot.

Nagi is a slender and petite young woman as she's 162cm tall and weighs 47kg. She has a youthful appearance, with a round face, small facial features, and wide brown eyes. She had long and light brown hairstyling with spiky bangs.

She has an edgy touch in her outfits, in contrast with her youthful physical, as she wears leather, spike, and revealing tops and skirts.

In her beast form, the Spurious, she kind of maintains a human appearance. Her hair becomes red like her right eye. It seems that an exoskeleton appears on her right cheek, her torso (covering her breast), her arms, and the lower half of her legs giving her a futuristic aspect. But the most prominent change in her transformation it's her right arm fully covered by the exoskeleton and complemented by a red blade. In biological terms, Spurious means a structure that has a comparable appearance but nonetheless has a diverse structure. This identifies what she shares similar physical traits in her Beast Form with Xion the Unborn.

Nagi was one of the victims of Xion's rampage against the Zoanthope during the tabula event when he was under the control of a demonic entity, the Unborn. She was mortally wounded but, when the Unborn took control of Xion again, Nagi was brought back to life by Gaia. Gaia gave her a "new body", the Spurious form, a beast form also using the Unborn's power, like Xion's beast form. Nagi decided to hunt Xion who she thought could bring her old life back. When she finally found him, Xion didn't know who she was and insulted her to be a "crude imitation" of him. As they both shared the Unborn's power, Xion was able to trap Nagi and turn her into an Unborn's minion like him. In the end, both of them got freed for the Unborn's power and vanished the demon.

Nagi has a lot of easy and fast combos with remarkable damages making her an easy character for beginners. Some of her combos are even given a second chance if they miss, for example, If Nagi's

misses because the enemy is down, she will continue with five more strikes that will hit a down enemy or if, her Beast Drive, Harakiri is blocked, she will follow with an unblockable attack.

In her Beast form, she obtains a blade and most of her Beast attack takes advantage of her new weapons, giving her more range. As a disadvantage, she has one of the less damaging Beast Drives.