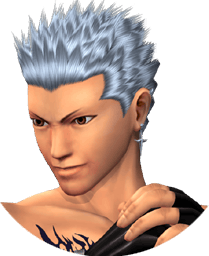 Reiji Takigawa, is a fictional character from the Bloody Roar series. His beast form is the Crow as his surname the "Yatagarasu" refers. He first appears in Bloody Roar 4.

"Relaaax, relax... You'll never wake up again after this!"
— Reiji in Bloody Roar 4

Reiji Takigawa (滝川澪爾), is a fictional character from the Bloody Roar series. His beast form is the Crow as his surname the "Yatagarasu" refers. He is Yugo's main rival.

He first appears in Bloody Roar 4.

Deep in the mountains, there are four clans of fighting monks known as the 'Yatagarasu'. Within these clans, the power of the beast transformation is passed down, though it is sealed until the inheritor is judged an adult. However, one of the heirs to the families, Reiji, had his seal broken prematurely before the coming of age ceremony because of the Tabula incident in Bloody Roar 3. Reiji, who deep down harbored destructive tendencies, used these newfound powers and killed his father, a member of the four clans, and fled the temple. Reiji went out in search of strong Zoanthropes, finding great pleasure in killing a powerful opponent, though now he is on the run from the remaining Yatagarasu who pursue him.

Reiji ends up disappointed after fighting what could have been his greatest opponent, the dragon. His thoughts drift upon the dragon and the Unborn, unhappy that his life was controlled to have such worthless dealings with. Mana kneels over Ryoho, sadly apologizing to him for being so weak. Reiji tells her to stop sniveling. Mana cowers in his presence. Then, Reiji's rivals from the Yatagarasu arrive. He seems pleased to see the three as he asks if they want to play and their defeat will stay in his mind forever. He transforms and attacks them.

Reiji is cocky and devious. He likes to insult people at every chance he gets and disregards everyone as being weaker than himself, usually treating them to kill them. His brashness and cruel attitude make him very much the antagonistic force that he is.

Reiji has a slightly tanned complexion, he has spiky silver-tainted hair, small brown eyes, and width-short pointy eyebrows. He shows a muscular build, which is apparent as he always appears chest exposed, he has a lean and muscular body.

One other noticeable feature is his tattoos. He has tribal-inspired tattoos on both of his shoulders, line with spikes on each wrist. He has also what seems to be blazoned from the Yatagarasu clan, one on his chest and another, much larger, on his back. The blazons seem to assemble symbols like wings, feathers, arrows, and spears.

In his beast form, a Crow, he often has very dark blue feathers and red eyes. His pants and his gloves get shredded. His beast form has a lot of similitude with the Northwestern crow, a crow species.

During a fight, in his beast form, Reiji loses feathers which slowly fall on the ground.

After the earthquake, the only clues that Yugo had on what could be the source of this disaster were two peoples called "The Black Shadow" and "The Spurious". As he investigates, Yugo comes across Reiji which was the Black Shadow (The Spurious being Nagi). Reiji already knew Yugo for his fighting skills reputation (and allegedly his boxing career), calling him "famous". Reiji, with his competitive temper, fights Yugo as soon as he can but he is finally beaten by his opponent who, quickly, moves on.

As a flying Zoanthrope, Reiji is one of the few fighters able to do air dash in his Beast form with Jenny. As long as he is airborne, Reiji can repeatedly do air dash but will lose height doing so but, in comparison, the loss will be less important than during Jenny's air dash.

Despite the information being absent from official documents, as a Hyperbeast, Reiji seems to gain Counter Hit Effect and Rave as his two Abilities Plus. Respectively, the ability to have all of her attack working as counterattacks and all of her special damage attacks increased and, also, the ability to increase his speed and defense ability and, also, to cancel any of his attacks.