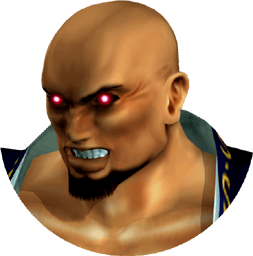 Ryoho, real name Rao Mamurasaki, is a fictional character from the Bloody Roar series. His beast form is the dragon. He is the primary playable character as part of a tag team with Mana but can be unlocked as a solo character. He appeared first in Bloody Roar 4 where he is the final boss for most of characters.

Ryoho (リョウホウ), real name Rao Mamurasaki (真紫 羅緒), is a fictional character from the Bloody Roar series. His beast form is the dragon. Although he can control his zoanthrope abilities, he has to keep his beast form sealed under the protection of Mana due to its immense power.

He is the primary playable character as part of a tag team with Mana, playing the human role of the duo in battle. His Dragon form can be unlocked and playable.

He appeared first in Bloody Roar 4 where he is the final boss for most of characters.

Ryoho belongs to a secret temple that supports both the Buddhist and Shinto religions together (which had managed to escape the Meiji Restoration law that separated Buddhist and Shinto religious activities). A year before there was an attack by the Unborn though after the incident, Ryoho lost his memory. Shortly afterward, a young Shinto miko, Mana, appeared. She had the power of the legendary ninetails. When taken under Ryoho's care, people who were pursuing Mana for her power left her alone. A year later, earthquakes and Zoanthrope violence began to occur. To protect the temple, Ryoho set out on a journey with Mana to face the evil that had caused these problems. [...] Ryoho managed to defeat the Dragon within himself thanks to Mana's help. When he awoke he found Mana standing over him, assuring him that the dragon had now been resealed. She also admits her knowledge of the dragon and the seal when he asks her about it. The dragon was released by the Unborn's attack the year prior. The Unborn was defeated but the dragon's power was too much for it to exist and the guardians and Mana's sister fought the dragon and re-tested the seal. At that time, Mana was too weak and could not handle the power so her sister had to handle the responsibility of the re-sealing. Ryoho feels guilty because of what happened, and asks to know what the connection is with the dragon. The dragon, as she explains, was made by the life force of the planet to defend it from anything that potentially threatened to damage the world. Because of this, the dragon held back the Unborn. Mana puzzles over the fact the dragon didn't calm down when the Unborn was defeated. Ryoho says that the things most likely to destroy the planet are the humans.

Ryoho is strong-willed and compassionate. Most of the time he is usually quite serious, though tends to softened up around Mana because of their father/daughter-like relationship. He is an honorable man by nature, respectful to all those around him.

Ryoho both as a tag-team and alone is rather unique compared to any character in the series this far.

With Mana, Ryoho can cause more damage with than most people, setting up distracting opponents for Ryoho to follow up with stronger attacks.

Alone, Ryoho is still a formidable force. He possesses a powerful 'building' stance, unleashing a devastating punch the longer he stays in it. Despite his physical human strength, Ryoho truly shines in his beast form. Possessing the largest beast form, Ryoho is nigh-unstoppable. His fighting style also changes dramatically. He often attacks by swinging his huge head around. He can also sweep the ground with his tail repeatedly, and can often end battles just by spamming that one attack. In addition, Ryoho's beast form possesses projectile attacks by exhaling fire balls that can be delayed. In addition, his two Beast Drives are even more devastating. His primary one shoots out a constant beam of fire that pushes and traps the opponent all the way to the other side of the arena. His secondary one however, is an instant-KO attack where he spits fire in a wide spread direction. Finally, Ryoho's beast form never flinches when taking damage, allowing him to easily punish opponents without being interrupted.

In Hyper Beast mode, Ryoho shares similarities with Uranus in that he maintains a human form. However, combined with his human form's attacks, he can now launch fireballs from his hands.