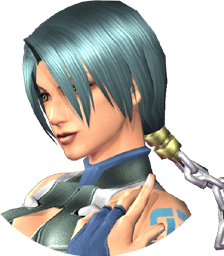 Uranus is a fictional character from the Bloody Roar series. She appears and stays as a secret character since Bloody Roar 3. Thus far, Uranus remains the strongest and fastest character in the entire series, outclassing the rest of the series roster.

Little it's known about her as she didn't make appearance in the story of the games.

Thus far, Uranus remains the strongest and fastest character in the entire series, outclassing the rest of the series roster.

She is the strongest Zoanthrope, the Chimera, created by Tylon. Despite Uriko being converted in the same way (before losing her ability to shift to her Chimera form), it's unclear if Uranus was also a regular human kidnapped (or enrolled) by the corporation or if she was fabricated in a lab, as a clone for example.

Uranus is an aggressive character, who takes pleasure in fighting. She has no qualms about hurting people, though underneath this, she appears to be a tortured soul looking for a meaning to her existence.

Uranus appears as a young, attractive woman of average height with a slender figure, teal hair the same color of her namesake planet, and golden eyes. She is usually seen wearing a form-fitting bodysuit of the same color as her hair and eyes, as well as high-heeled boots. Her overall look gives her a more futuristic appearance than the rest of the roster.

Her beast form resembles a towering monster with features lightly inspired by the mythological Chimera, as you can notice a mix between a snake, a lion (her two tails) and a goat (her horns). Her fur in this form is teal, and possesses giant horns around her shoulders. Unlike other female fighters, she lacks her breasts in her beast form. She has a tattoo of "03" on her shoulder that is retained in chimera form.

In all of her appearance thus far, Uranus remains the strongest and fastest character in the entire series, outclassing her opponent in every way. Her moveset is largely borrowed from the original incarnation of Uriko with some key differences. She spends the entire round hovering a few feet above the ground. Aside from lightning fast kicks and punches, Uranus can utilize purple-colored energy, usually in the form of lightning to deal multiple hits or to grapple opponents. In addition, she possesses teleportation, able to appear both behind and above her opponents. making her attack patterns almost unpredictable.

In her beast form, Uranus' strength increases but retains her speed absolutely, able to mow down foes with ease. Although attack is possible with only the Scratch button, players can utilize both human and beast forms at will be pressing the Punch or Kick button to immediately return to human form and then transform back. Upon entering Hyper Beast mode, Uranus retains her human form, but possesses the attacks of her beast form and human form and even emits growls as well. These attributes often result in her ban from competitive and tournament play.

As a Hyperbeast, in Bloody Roar: Primal Fury and beyond, Uranus gains Cancel B and Counter Hit Effect as her two Abilities Plus. Respectively, the ability to cancel any attack and the ability to have all her hits treated as counter hits.

Retrieved from "https://bloodyroar.fandom.com/wiki/Uranus_the_Chimera?oldid=15968"
Community content is available under CC-BY-SA unless otherwise noted.