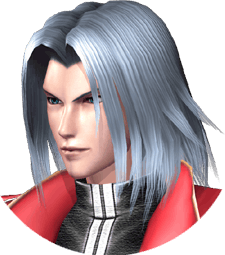 Xion is a fictional character from the Bloody Roar series. His beast form is the Unborn which can be seen as a demonic entity. He first appears in Bloody Roar 3. His role in the games is usually as an antagonist.

"You have two choices, die or be my slave."
— Xion in Bloody Roar 4

Xion is a fictional character from the Bloody Roar series. His beast form is the Unborn which can be seen as a demonic entity.

He first appears in Bloody Roar 3. His role in the games is usually as an antagonist.

The 'XGC' mark gives Zoanthropes the power to possess the Tabula of a Thousand Beasts, which has been sealed to prevent calamity breaking free and gathering into one being. Xion wishes to break the seal of the Tabula to revive the power that lies within. His goal is to completely exterminate the Zoanthropes with the 'XGC' one by one. Once the Tabula is integrated, the world will change its form. Xion walks his path alone to free the Unborn from a distant dimension. He killed his sister, whose heart was attached to the 'trivial' world. He sees it all as a useless waste that must be eliminated to create a new and better world. [...]Xion defeats Yugo, absorbing his energy. Now he has enough power to open the door to the dimension where the Unborn are sealed. He channels the power through himself, drawing in all of the power of the Tabula. A blinding light spills from him as the energy of the Unborn fills the world, allowing them to spread and take over the planet.

When Xion awoke, he realized he'd done something terrible. He'd been a mad man, consumed by a dark presence. He remembered the man who'd defeated him told him to survive, and a woman passing saying that he couldn't regain but he could compensate. His hands were dirtied with blood, but he had not been in control and never meant his actions. It was easy to think that he could make up for the pain he'd caused but he thought it would most likely end up with his complacence. But he had to try, as long as he lived. [...]Cronos in phoenix form falls collapses, defeated by Xion, who reaches out and takes the now human prince by the hair as he raises him up. Long interrupts the scene, asking if he thinks if anymore of these cruel experiments will help? Xion looks down at Cronos and then scowls towards Long before thrusting out a spurred blade from his arm. He points it at Long, who steps in unafraid, allowing Xion to press the blade against his throat. Xion relents and withdraws the blade. He stands and turns to walk away. He stops and looks back at Long, telling him that he just wants to learn the secret behind the Zoanthropes. Long tells him that he is not alone in his quest and that he should find compassion during his quest. Xion simply walks away.

Xion reflected upon the incident a year ago. A woman stood before him; she was not a Zoanthrope. She was saying something to him but he couldn't hear her words. What stood before him was the truth, and he needed to remove it from his path. Other Zoanthropes want to live together with humans, but that had nothing to do with the Unborn. Over the woman's fallen body, he muttered that humans were making a mistake to try and defeat him. Though he has doubts that his words at the time were actually his own. All he knows now that Zoanthropes are coming before him once more to defeat him. The battle has just begun... [...]Xion in his Unborn form, stands over the defeated dragon. He declares that it is the end for Ryoho, and that this is their chance to get a blow in on Gaia, whose been taking advantage of them. Mana awakens at this point, shocked at what has just occurred. Xion steps nearer to the dragon, preparing for the final strike, when Mana casts her power on Xion and freezes him with a seal. He struggles but can't move. He can't believe that it was Mana who'd stopped him. She asks him how he likes it - that he can't get free? Xion growls at her with annoyance. Mana has all her attention on Xion, she doesn't notice another figure enter the scene and strike down the dragon. When she realizes, it's too late. The dragon roars in pain as a long blade is shown to be embedded in his body. The owner of the blade is Nagi, who is under the control of the Unborn. Mana cries out, watching as Nagi pulls out the blade, spraying blood from the wound as the dragon slowly dies. Nagi remains silent as Xion laughs victoriously. Mana screams and transforms in a blinding light, the power of the Ninetails dispels the control of the Unborn from Xion's and Nagi's bodies. Xion mutters how stupid he was before the pair collapse. The Unborn spirit reforms above their bodies, cursing Mana for what she'd done. Both Nagi and Xion regain control of themselves, and when they notice the Unborn, effect a double strike, destroying the entity. The pair are left tired after the events. And at the same time, Fox Mana walks over to the fallen dragon, howling mournfully. 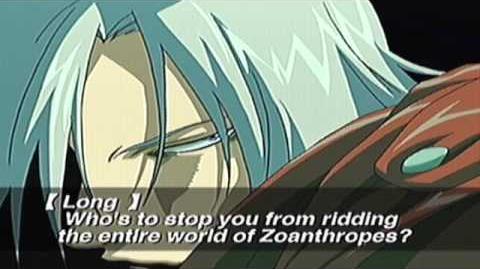 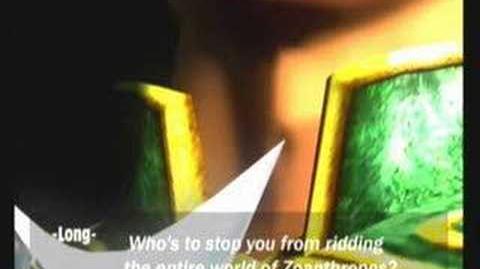 Xion appears to be a cold and calculating man with a vicious intent to destroy everyone around him, though this only seems to be true when he is under the control of two different forces: his sister and the Unborn Spirit. Without these other factors, Xion appears to be a rather quiet man, who tends to brood and keep pretty much to himself.

[...] His beast form is demon-like, based on traits of a cockroach and a praying mantis.

Nagi was one of the victims of Xion's rampage against the Zoanthope during the tabula event when he was under the control of a demonic entity, the Unborn. She was mortally wounded but, when the Unborn took control of Xion again, Nagi was brought back to life by Gaia. Gaia gave her a "new body", the Spurious form, a beast form also using the Unborn's power, like Xion's beast form. Nagi decided to hunt Xion who she thought could bring her old life back. When she finally found him, Xion didn't know who she was and insulted her to be a "crude imitation" of him. As they both shared the Unborn's power, Xion was able to trap Nagi and turn her into an Unborn's minion like him. In the end, both of them got freed for the Unborn's power and vanished the demon.

Xion is a good character for beginners as he has good speed and, basically, simple combos with good range variations between low, mid and high hits. For a more challenging play, he also has directional and intricate combos. In his Beast Form, Xion gains blades on his arms and legs, giving him an advantage in reach.

As a Hyper Beast, in Bloody Roar: Primal Fury and beyond, Xion gains Any Cancel A and Kezuri B as his two Abilities Plus. Respectively, the ability to cancel any of his regular attack and the ability to have his blocked attacks damaging on multiple parts of the opponent's body. Xion is the only fighter to have access to Kezuri B as an Ability Plus.

Xion was included due to our desire from Hudson to give Yugo a rival [1], someone with an anti-hero image. He has a powerful beast form with a long reach and various tricky movement options, his human form was designed to be a little restrained in response.